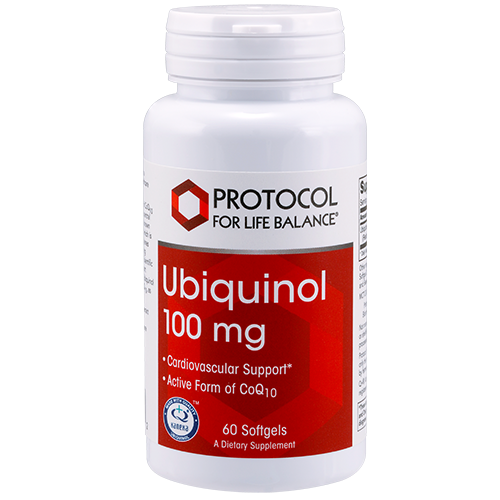 How it Works:
Ubiquinol is the active form of CoQ10 produced naturally within the body that plays a central role in cellular energy production.* Ubiquinol is known for its powerful free radical neutralizing activity, which is important for the protection of biological membranes against oxidative stress, as well as for regenerating antioxidants such as Vitamin C and Vitamin E.* Scientific studies indicate that Ubiquinol can help to support normal cardiovascular and neuronal functions.* Ubiquinol has superior bioavailability to other forms of CoQ10, as shown in clinical trials.

Suggested Usage:
Take 1 softgel daily preferably with a fat containing meal, or as directed by your healthcare practitioner.

Cautions / Interactions:
Ubiquinol may interact with warfarin. If you are taking warfarin or other anticoagulant medications, consult your healthcare practitioner before you use this product.

Do Not Eat Freshness Packet. Keep in Bottle. Natural color variation may occur in this product.

Protocol For Life Balance® CoQ10 products contain only the natural, all-trans form of CoQ10 produced by fermentation.
Q+®, Kaneka UbiquinolTM and the quality sealTM are registered or pending trademarks of Kaneka Corp.