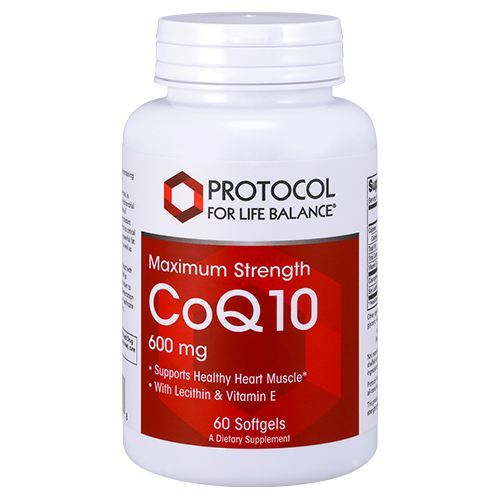 How it Works:
Coenzyme Q10, also called ubiquinone, is present in almost all cells, where it is necessary for mitochondrial energy production.* The body’s highest concentrations of coenzyme Q10 (CoQ10) are found in the heart, where constant chemical energy availability is imperative. In addition to its critical role in energy production, CoQ10 also functions as a powerful fat soluble free radical scavenger for vascular structures, as well as for other tissues including the brain and nerves.*

Suggested Usage:
Take 1 softgel daily with a fat-containing meal, or as directed by your healthcare practitioner.

Cautions / Interactions:
Coenzyme Q10 may interact with anticoagulant and antihypertensive medications, as well as chemotherapy agents. Statin medications have been shown to decrease CoQ10 levels in the body and CoQ10 supplementation may be useful when taking these drugs. Consult your healthcare professional if you are taking any of these medications.

Protocol For Life Balance® CoQ10 is pharmaceutical grade, all-trans form of CoQ10 produced by fermentation. This product has more CoQ10 (600 mg per softgel) than our regular strength product (60 mg per softgel).